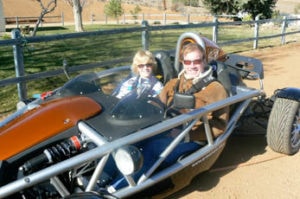 Lots of people ask me if my Ariel Atom is legal. The short answer is YES. But there’s more to it than that. It’s not as simple as walking off a car dealer’s lot with title and registration. As a potential Ariel Atom owner, you’ll need to know about a California DMV code named SB-100.

The SB-100 gives 500 vehicles a year the opportunity to be sequenced “specially constructed.” The DMV gives 500 vehicles a chance by giving away the numbers 1 to 500. Obviously, in the whole state of California there’s a lot of people putting together kit cars or Cobra replicas, etc. So it’s really important to get one of these numbers as quickly as you can.

I lined up at the DMV at 4am on January 2nd to be first in line. Even then I had a miserable 3 hour wait while the local office kept ringing and getting a busy signal from Sacramento. Lots of other drivers all over California were busily calling Sacramento trying to get their numbers as well. After three hours of torture I was given a sequence number. This was the beginning of the process of getting my Atom street legal.

This vehicle qualifies as a specially constructed vehicle because it is sold as a kit for self-assembly. Therefore, the laws that apply to a passenger vehicle don’t apply to it. This special sequence also gets you a lifetime exemption for a smog certificate. Without that exemption, the Ariel would never qualify. So the SB-100 is great for the new Ariel Atom owner.

Next, you’ll need to have a CHP inspection where they go through some of the details on the car. Then you’ll go to the smog referee who verifies that you’re smog exempt. You’ll have a brake and light inspection, back to the DMV and lo and behold you get your license plates. It’s a wonderful feeling when that happens!

As an Ariel Atom fan I want as many people as possible to own an Atom, to be legal and get licensed. Obviously I’m not going to be able to get into all that detailed paperwork on this site, but you can go to ArielAtomClub.com and become a member. There you’ll have access to the forum where there are some tremendous people who can help you through the process.