PART II PICKING UP THE ATOM I had previously decided, because of the weather, that I wouldn’t fly up to Oregon and drive the Atom back. Instead I decided to drive my Dodge Ram truck and trailer and pick it up. I didn’t want to trust it to any of these delivery companies either. So I hitched up my trailer, you can see the pics here. 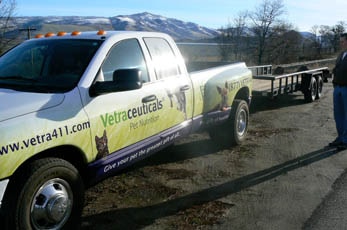 So the trip began. I headed up the 5 freeway all the way to Ashland, Oregon. It was the middle of winter and there’s a place called the Siskiyou Pass, a mountainous, twisty pass just inside Oregon. Chains were required and my heart sank, because although my truck is a Dodge Ram Dually, it’s not 4WD. The weather was really poor and I couldn’t face the thought of something bad happening to the Atom on the way home. 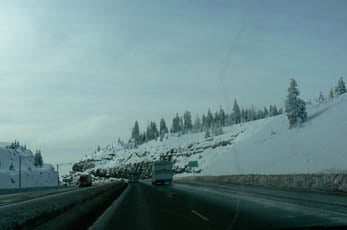 I finally got into Ashland and pulled into Brammo to what frankly, looked like a shed. I couldn’t believe I was in the right place, and I hesitatingly looked all around to make sure I hadn’t ended up on the wrong street. Eventually, I had to knock on the door and sure enough, it was Brammo. Inside I met Bill Feagin, who was the man responsible for selling me the car and just past him, peeking around the corner was my Atom. It was the first time I’d laid eyes on it in the flesh. It was an incredible feeling. The Atom was everything I’d imagined it to be. It was a beautiful piece of art. 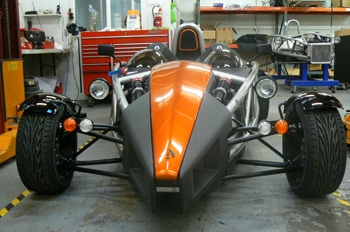 So, Brammo gave me a tour of their factory. It’s a really well-organized facility. The high grade steel tubes enter at the door I was standing at. There’s an incredible jig table accurate to 10/1000’s of an inch where they form. bend and cut the tubes ready for welding into a chassis. They weld all the pipes together to make the chassis, the chassis is sent out and gets powder coated. When it comes back, it’s set on a rotisserie where they spin the frame around and get all the plumbing and wiring in place. They attach the body work and eventually the completed car comes around to the place where my Atom was sitting. 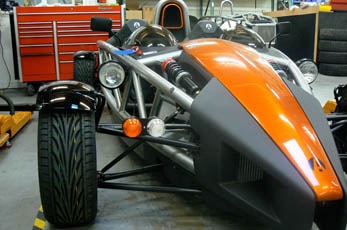 I can’t describe the level of workmanship on the car — it’s flawless! I couldn’t find a blemish. Not only was I blown away by the level of skill they had in welding these chassis together, I got to meet Eric, the guy who welded my chassis and assembled my vehicle. I’m not so sure there are many Ferrari or Porsche owners who can say the same thing. So standing there, I just couldn’t take my eyes off the car. I’ve got receipts in my hand. I’m looking at this fantasy car thinking “I own this”, yet it doesn’t seem real at all. Visions of Clarkson, You Tube, track day videos. It’s a bloody Atom and it’s mine”! It’s a pretty extraordinary feeling. So you can guess what’s coming next… It’s time for the test drive.

I let Eric take the helm for the test drive, being that I’d never driven a vehicle that does 0 to 60 mph in less than 3 seconds. Call me a chicken, but with snow and ice everywhere, and that kind of power, I let Eric drive it first. I have to tell you, I’m not the best of passengers anyway, even in a Ford Fiesta, but the passenger seat in an Ariel Atom is not the place for me! The best description I can make of what it’s like to ride in the passenger seat of an Atom is, just imagine you were sitting side by side with a Formula 1 motorcycle rider. That’s how it feels sitting in the passenger seat. It’s like sitting side by side on a wicked sports bike. For me it’s a horrible feeling because I like being in control.

So, we’ve got helmets on, we’re driving slowly down the backroads behind the Brammo factory, we went up to Dead Indian road and Eric nailed it. I’m telling you there is no amount of video watching that could have prepared me for this. Words cannot describe what it feels like to be thrust backwards by an Ariel Atom. You could see Eric put his foot on the billet throttle, and she just belched fury, the Atom absolutely belched venom. We shot up the road, just an incredible feeling. I wish I could say it was like I imagined, but it was so far beyond that, my imagination wasn’t capable of feeling the acceleration of that car. I had a maniacal laugh I could not control cackling inside my helmet at what an utterly ridiculous car this is. We came upon a series of bends in the road. The first one was reasonably tame. The second one, we got to within 50 feet of and Eric floored it and I’m thinking ok, here’s my new car that we’ll soon be pulling out of the ditch. Lo and behold it went ’round the corner like it was on rails. The best way to describe it is like being in a slot car. There’s so little weight in the car, it just goes round the corner. It’s completely and joyfully insane.

Thankfully, on my return, the Siskiyou Pass wasn’t too hairy, and the only snow left was on the vista of pine trees and mountains. I kept looking in the mirror to make sure my Atom was safe and by the way, you can’t believe the amount of attention an Ariel Atom gets on the road. People were leaning out of their car windows to take snapshots with their camera phones. I had cars nearly run me off the road. It became quickly apparent that this was a vehicle that would turn heads. It took me about 14 hours to get back to Southern California, giving me lots of time for reflection.

I mentioned in Part I that Vetraceuticals is what afforded me the purchase of the Atom in the first place. Because of the “head-turning” attention that the Atom was getting during the drive (not to mention the attention my truck gets with all the Vetraceuticals pet placards on it) I called Andrew, the CEO of Vetraceuticals and asked him point blank if he would consider sponsoring the Atom — which he did without hesitation. So, my Ariel Atom is going to get a little Vetraceuticals graphic wrap on it during certain occasions, and I’m pleased to say Vetraceuticals has been amazing. It’s a pet nutrition company. I’m a big believer in it. There is no product like it for keeping your dog or cat healthy. As a thank you to Vetraceuticals for sponsoring my Atom and allowing me to indulge in my habit of speed, please click on the link to visit the site.

The Atom only has 3 1/2 inches of ground clearance, but thankfully I got it off the trailer without incident. The Atom is now home and in the garage. Is it real? I still have a problem believing it when I go out to the garage. 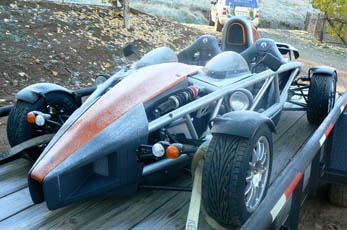