Buying an Ariel Atom is all well and good, but it is built to be a Track Day car. Brammo are not manufacturers. If they were, the car would have to have air bags, windshield wipers — all sorts of nonsense. The Atom is considered a specially constructed vehicle. Despite it’s being built as a Track Day car, it is possible to get the Atom legal for the streets, and there are numerous examples of street legal Ariel Atoms in California. After I got the Atom in my garage, the next step was a trip to the DMV and an exorbitant sales tax fee for bringing the car in from Oregon. I filled out a lot of paperwork and I got the red permit, which allows me to drive it now until I meet further conditions.

I won’t go into all the details of how to get the Atom street legal, but if you’re serious about getting one and you want to get it legal, there’s a fantastic resource at the Ariel Atom Owners Club. If you sign up to be a member you can have access to their Forum which is an excellent source of information. There are some splendid members in the Ariel Atom Owners club, I haven’t met a bad person there, and they’re all very helpful as a community. That would be the resource to check first.

I got the temporary permit so I could drive the vehicle, and the first day I took it out I was a little ginger with it. Still, it was extraordinary. I wasn’t taking it above 5,000 RPM for the break in, but when I punched the throttle, even slightly, it was Hells Own Fury. It must feel fairly close to what it’s like to take an F-18 off a flight deck. It just unloads fury, you’re sitting next to the super charger air intake, and the noise of that is like the Anti-Christ. It’s an awesome experience, nothing I can describe. 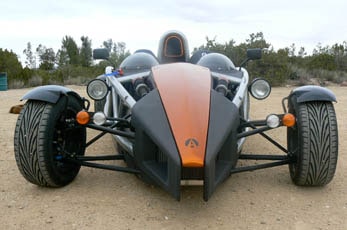 Luckily, there are many canyons near where I live and I’ve been getting progressively braver with taking it ’round the bends to see what it’s capable of, and I can tell you the Atom is far beyond my capabilities right now. But I will be working on changing that. There is a track nearby at Willow Springs Raceway. I haven’t been able to take my Ariel Atom there, because it isn’t fully registered yet, but it won’t be long before it is. Last week as one of the legal procedures of getting the car on the road, I took the Atom in for the CHP inspection and I passed that. Now, I’m just one minor hurdle away from having a completely street legal Ariel Atom. Once I have my license plates and it’s a registered vehicle I’ll be able to take it to Willow Springs Raceway and actually get a pro to show me how to drive it.

There’s an old saying that “Form Follows Function.” Well, they built a car that was designed to go very fast on acceleration, to handle very well, and in building the car to get that functionality, they’ve created something you could live with in your front room. It really is a work of art. The way the exo-skeleton frame flows and curves… I could go on and on. I have all my gym equipment in my garage so when I go out and train, something else on the car will catch my eye. Just the attention to detail and the way they’ve wired on the nuts on the track brakes. Little things that keep catching my eye, it’s just “automotive pornography.” For sure I’m not alone in thinking it’s auto porn. 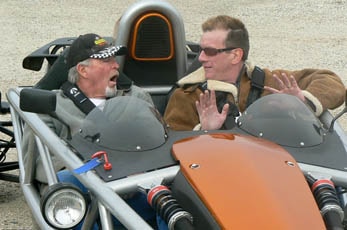 I’ve been out on the freeway with it and the amount of attention it gets from every man woman and child is remarkable. Plenty of pictures on camera phones, God knows where those have ended up. Some of the comments on the freeway have been funny as well. People have asked questions ranging from technical issues about the Ecotec to “Dude, that s**t is sick, that s**t is sick!!!” There’s no doubt in my mind that the Atom will be a fantastic publicity vehicle, because everywhere it goes it gets an enormous amount of attention.